Home » Blog » A Guide to Studying at Rochester Independent College 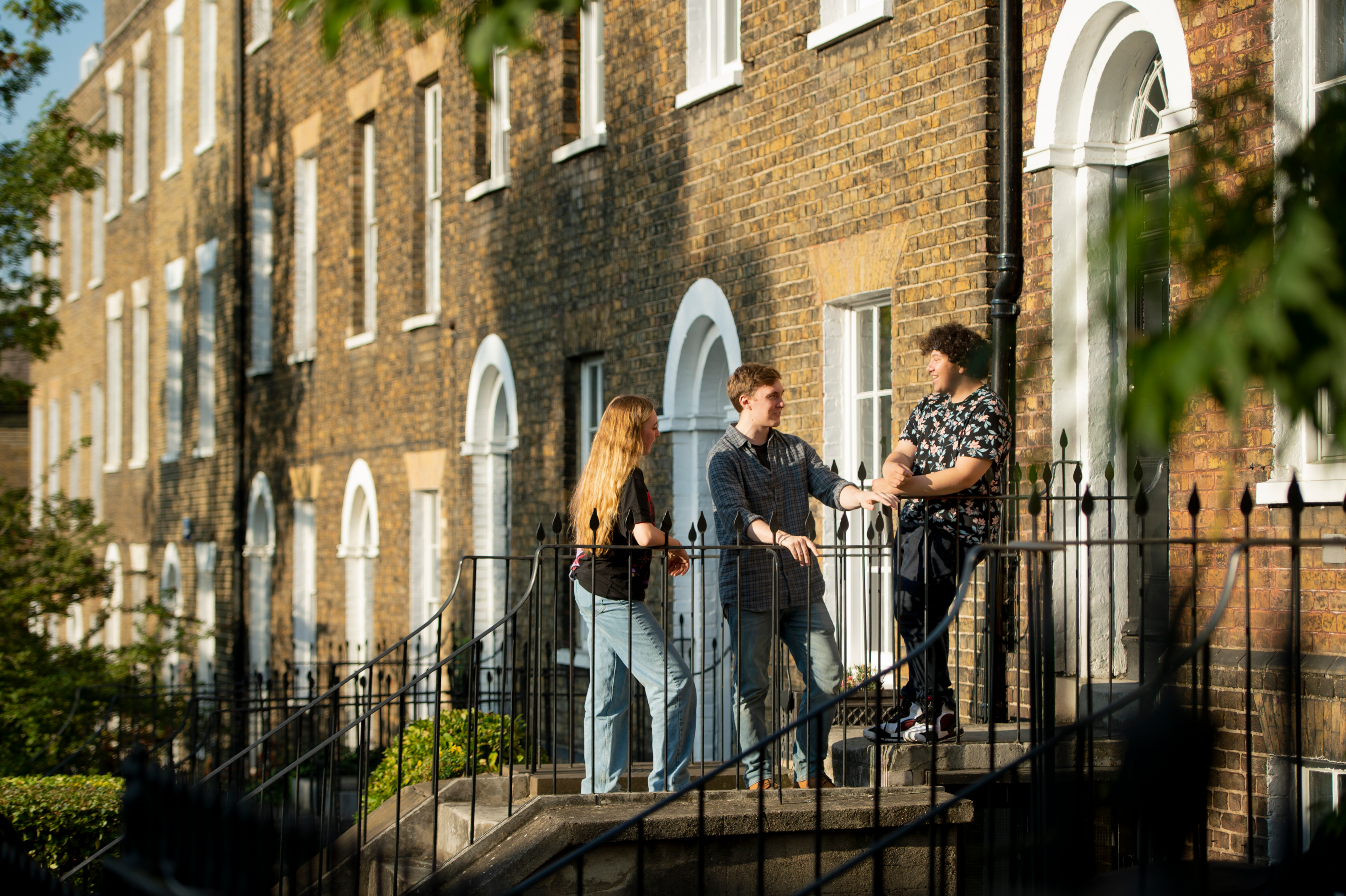 Rochester Independent College (RIC) was established in 1984 and is a co-educational day and boarding school. The college occupies the centre of Rochester and has been part of the Dukes Education family since 2016.

RIC is a Good Schools Guide School. Rochester Independent College’s last full inspection by the Independent Schools Inspectorate was in November 2018. The quality of student achievement, academic and otherwise was judged to be ‘good’ and the quality of personal development ‘excellent’. Overall RIC is regarded very highly in the south east for achieving high exam results and providing better provision, with most of its students going onto studying everything from Fine Art, Natural Sciences to Fashion Marketing.

Set up in 1984 by mathematicians Brian Pain and Simon de Belder, the college was known as Rochester Tutors and predominantly focused on examination success for older teenagers, in particular teaching A levels and exam retakes.

Gradually over the next thirty years Rochester Tutors was renamed Rochester Independent College.

Other than being a school with a reputation for academic rigour, RIC is a place for individuals and is a real alternative to traditional schools, helping form students’ attitudes to become more independent and mature as they make their way onto the next phase of their young adult lives.

At RIC there is an original focus on individuality giving the school a unique sense of expression of its own. To help create a more informal fun environment for young people, there’s no uniform, everybody is on first name terms and the average class size is 8. Creative arts share equal billing with traditional academic study.

Atmospherically relaxed, there’s a new emphasis on high academic achievement without unnecessary pressure. It’s a natural stepping-stone between school and university with a creative buzz.

The college mascot is the flying pig, a riposte to the cynicism which greeted the college’s chances of success when it was founded.

Originally it started as a one terraced house, but as the school expanded, it gradually bought up 14 (mainly) listed buildings in the heart of a designated conservation area. 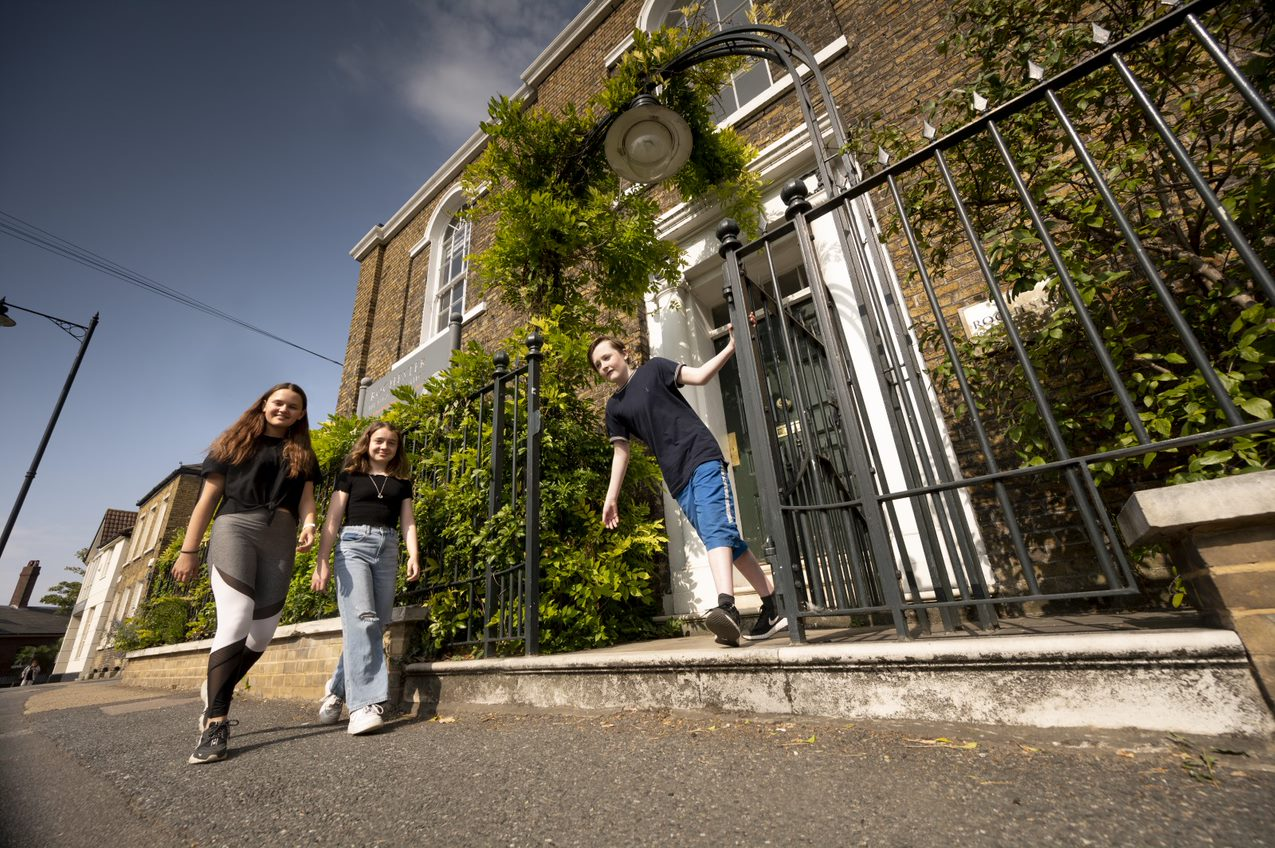 Rochester is a town and former city in Kent, England. It is located at the lowest bridging point of the River Medway about 30 miles (48 km) from London. The town’s location is due to the bridge which carries the Roman Watling Street (now the A2) over the river.

Rochester is an ancient fortress town, built to guard an important Medway crossing, where the old Dover Road (Roman Watling Street) crosses the river at its lowest point. When the Romans came they fortified the crossing and a walled town grew up beside it, called Durobrivae Cantiacorum; which means “the bridges of the stronghold”. Sections of the old Roman town walls still remain to this day.

Interestingly, the famous English author Charles Dickens grew up in Rochester and his father worked as a clerk in the Navy offices in nearby Chatham. The city is closely associated with his writings and parts of it often feature in his novels. For example, Dickens mentions the 400 year old Royal Victoria and Bull Hotel (close to the town bridge) in his Pickwick Papers and also the Tudor Eastgate house on the High Street, where his writing chalet has been preserved. 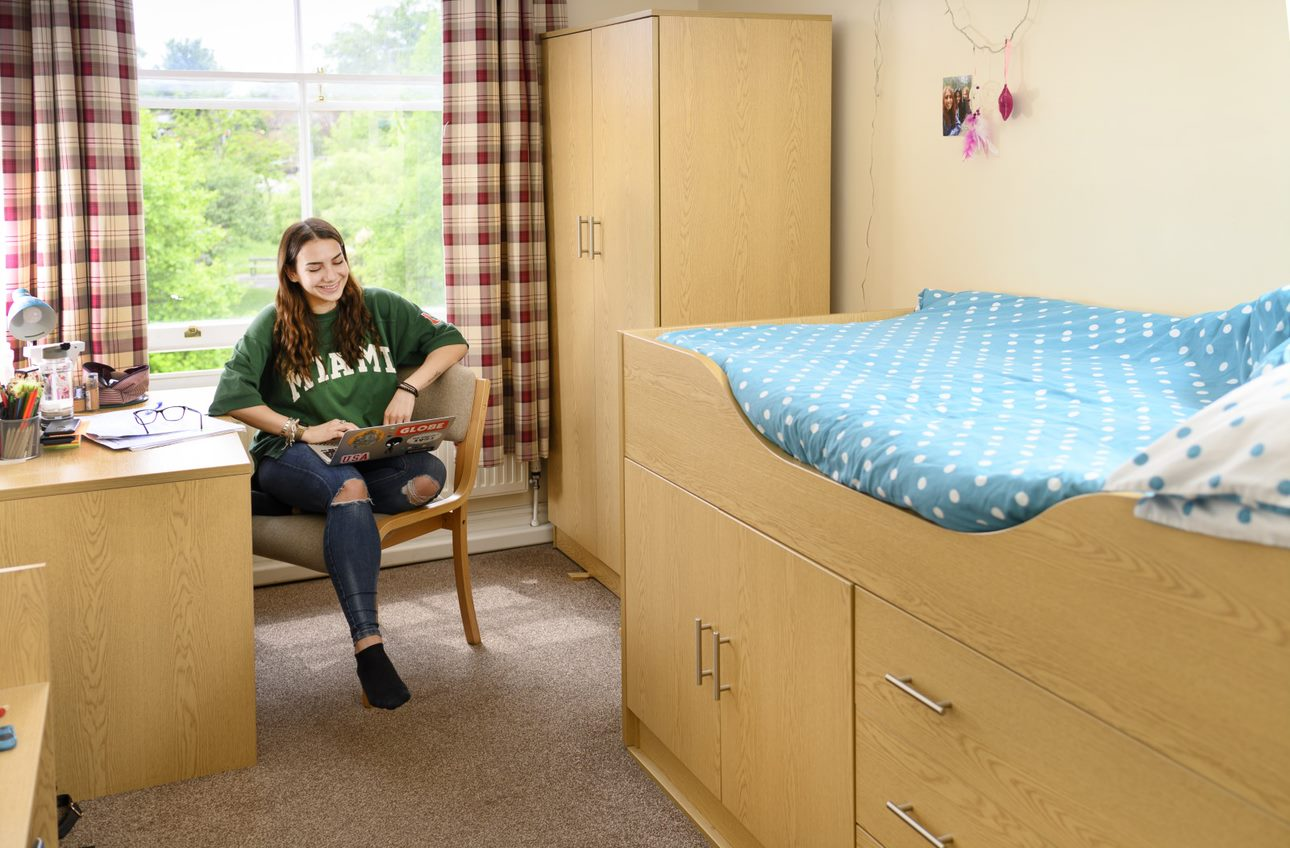 The former Dickens Hotel is a Grade II listed building that offers high quality single rooms, many of which have an en suite facilities. This premium boarding facility features common rooms, student kitchens, and landscaped gardens. The building dates from 1840 and features a grand 8 Tuscan duret veranda of 8 columns.

As well as common rooms and study areas, the college has facilities not too dissimilar from a university hall. The summer students have access to the College’s sports pitch, fitness centre, on-site cinema, art studios and award-winning wildlife gardens. The historically distinctive site with eye-catching listed buildings linked by award-winning wildlife gardens creates a special sense of place to explore and in which to live, study and work during your summer course.

The college’s academic facilities include a theatre, Science Labs, a photography block, a MUGA area for sport, a gym, two canteens and a performance area.

Now listen in music fans, The RIC Lower School has a connection with iconic fictional astronaut Major Tom and rock star alien Ziggy Stardust! New Road House, home to RIC’s younger students, is fondly remembered by many in Rochester as The Good Companions Club, where a young David Bowie is recorded as performing at the club in 1964, before his cosmic rise to iconic fame. The welfare and wellbeing of our students at SBC is our main priority and our dedicated staff team are available 24 hours per day to assist with any needs that a student might have during their stay with us. We take great care to ensure that RIC is a safe environment for all our students and staff.

Close to but outside of London, Rochester is ideally placed as a base to explore England from. It’s a short journey from Rochester to Whitstable, so seaside day trips are a breeze and the art galleries and theatres of London are only 40 minutes away by train. 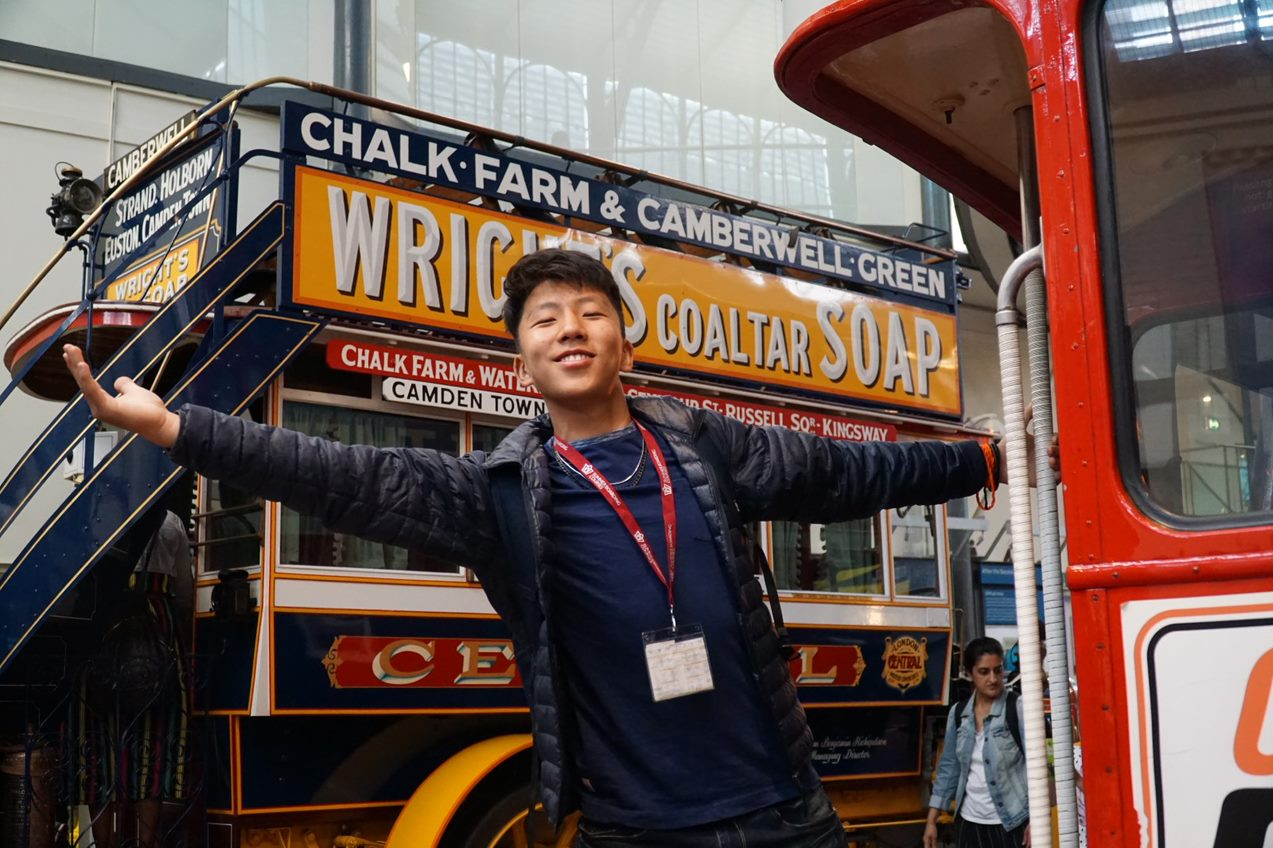 Trips to London are an integral part of each course. From nationally and internationally acclaimed museums such as the National Gallery, Tate, Victoria and Albert Museum and Design Museum to exciting independent London projects such as Shoreditch Street Art tours and RIBA London Open House Architecture walks.

During excursions, students will have some supervised free time in small groups, allowing them to visit shops and explore the local area. It is said that Mathematics is the study of every possible pattern which can exist. As such, Mathematics is a broad subject with a wide application in both professional and academic fields. Through the study of Maths, students will learn the subject-specific language that is an essential component not only for future study in Mathematics, but also in Natural Sciences (i.e. Chemistry, Physics, Astronomy and Biology) as well as Formal Sciences (i.e. Logic, Statistics, and Robotics). It is also essential to have an advanced level in Mathematics in order to study Engineering and Computer Sciences, in addition to many other scientific subjects.

Our Routemap English course is designed as preparation for A level. The course will introduce students to key tools to help them make the transition to sixth form successfully while improving their academic English.

RIC believe that there are 9 aspects to A-level success. Time, space, energy, IT, me, us, spirit, mind and body. By developing each of these and by unlocking confidence and ability to communicate in English, this course will help you to create your own route map to A-level and university success.

Our Business & Marketing course allows students to spend an interdisciplinary week exploring how to set up a sustainable and creative business including branding, product development, marketing, and promotion.

Our Art and Design Course is tailored specifically for artistically minded students. The course gives students the opportunity to explore a range of media, whilst developing their English language skills. Students explore a range of creative projects including art, film, fashion and environmentalism.

All of our courses are delivered by RIC in collaboration with SBC.

We hope our guide to Rochester International College has got you as excited about the coming summer as we are, and we hope you have a much clearer picture of all the fantastic opportunities on the horizon at this truly unique and vibrant college.

If there are any questions or queries in which you would like more information on then our dedicated admissions team are always on hand to answer any of your queries and are here to help you every step of the way.

We use cookies on our website to give you the most relevant experience by remembering your preferences and repeat visits. By clicking “Accept All”, you consent to the use of ALL the cookies. However, you may visit "Cookie Settings" to provide a controlled consent.
Cookie SettingsAccept All
Manage consent

This website uses cookies to improve your experience while you navigate through the website. Out of these, the cookies that are categorized as necessary are stored on your browser as they are essential for the working of basic functionalities of the website. We also use third-party cookies that help us analyze and understand how you use this website. These cookies will be stored in your browser only with your consent. You also have the option to opt-out of these cookies. But opting out of some of these cookies may affect your browsing experience.
Necessary Always Enabled
Necessary cookies are absolutely essential for the website to function properly. These cookies ensure basic functionalities and security features of the website, anonymously.
Functional
Functional cookies help to perform certain functionalities like sharing the content of the website on social media platforms, collect feedbacks, and other third-party features.
Performance
Performance cookies are used to understand and analyze the key performance indexes of the website which helps in delivering a better user experience for the visitors.
Analytics
Analytical cookies are used to understand how visitors interact with the website. These cookies help provide information on metrics the number of visitors, bounce rate, traffic source, etc.
Advertisement
Advertisement cookies are used to provide visitors with relevant ads and marketing campaigns. These cookies track visitors across websites and collect information to provide customized ads.
Others
Other uncategorized cookies are those that are being analyzed and have not been classified into a category as yet.
SAVE & ACCEPT